Review of the new release of Christopher Hitchens Early Writings… 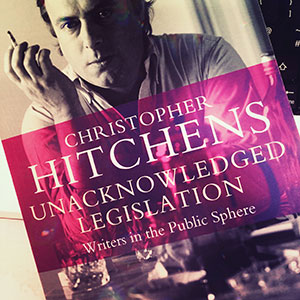 Atlantic Books have, in late 2014 rereleased three volumes of the late Christopher Hitchens essays from the1980s and 90s. ‘Unacknowledged Legislation’ accompanies ‘Prepared For The Worst’ and ‘For The Sake Of Argument’ as an important addition to any collection of essays on politics, literature and social observation. They are a worthy source of cross-reference for those interested in world affairs from that period and provide a valuable lesson for upcoming journalists on how to get into a story, research and then present it in a formidable as well as entertaining way.

These three volumes show how Hitchens built the foundations to become one of, if not the leading free-thinker, intellect and contrarian of modern times. To Atlantic’s credit they have also rereleased his later works on, amongst others, Bill Clinton, Mother Theresa and Henry Kissinger. Vital reading for anyone who automatically assumes these three were untouchable pillars of our society.

This particular volume which we know was dear to his own heart, concentrates on his writing from the 1990s, by the end of the decade Hitchens had become a common face on American political television and radio shows and his essays, such as the ones printed here were renowned for his trademark wit and unapologetic point of view. Here we find gems from Harpers, London Review of Books, Vanity Fair, The Nation and Times Literary Supplement, amongst others. Subjects, as you might expect are varied; Roald Dahl, Graham Greene, Andy Warhol, Isaiah Berlin, Rudyard Kipling‘s son, Rushdie, (no surprise there) Martha Nussbaum and an amusing dissection of Tom Clancy. There is plenty more.

Once again I must stress the importance of Hitchens and his work in this field in particular. If literary criticism is to survive, let alone grow then it requires a fresh and, yes, a somewhat audacious attitude when required. Hitchens wrote as he spoke, one can ‘see’ the glint in his eye as he reminded us, and the subject of his polemic of an uncomfortable point they’d rather have us forget.

“We won’t let them get away with it” he often said. He didn’t, as this book will attest.