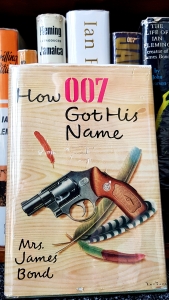 It would seem implausible that the subject of ornithology would lend inspiration for the naming of the world’s most famous fictional spy but it is true! Ian Fleming was a keen bird spotter and owner of one book in particular; Birds of the West Indies written by the Philadelphia born James Bond (1900-1989) who was an expert in his field. His book, first published in 1936 became the go-to resource for Carribean ornithology as well as finding a place on many an Ian Fleming collectors bookcase in subsequent years and in 1966 his wife, Mary Wickham Bond revealed all in her first book about her husband and his part in the famous spy series in How 007 Got His Name.

Educated at Cambridge, James Bond returned to his native America where he eventually worked for the Academy of Natural Sciences and from there he joined an expedition to the Amazon before concentrating his studies in ornithology.

James and Mary married in 1953 and the couple travelled extensively for Bond’s research, she was a devoted wife who wrote three more books about their life together: Far Afield in the Carribean: Migratory Flights of a Naturalist’s Wife (1971) To James Bond With Love (1980) and Ninety Years at Home in Philadelphia (1988) Her books were certainly of their time, they have a charm which comes from a committed and long lasting relationship such as theirs and this ‘Bond’ book sets the tone for her future work.

The cover for Wickham’s first book is a play on Richard Chopping’s work for the Fleming novels, illustrated by Arthur Barbosa (1908-1995) who was best known for his covers for Georgette Heyer and George MacDonald Fraser as well as pieces for Vogue and Harper’s Bazaar, it cleverly bridges the gap between the ornithologist and fictional spy and sits nicely alongside her husband’s famous book on my own bookcase.

Mary Bond’s book is full of amusing anecdotes about her husband and his sudden ‘fame’, she clearly enjoyed the attention though I imagine after time it would wear thin, particularly for him. Interestingly, when they meet Ian Fleming for the first time at his home in Jamaica they also meet Mr and Mrs Hillary Bray. Bond fans will doubtless recognise the man’s name from On Her Majesty’s Secret Service in which Bray, an expert in Heraldry has his identity ‘borrowed’ by Bond as he goes undercover. I am not sure if Mary Bond was aware of this at the time but Fleming dedicated the book to Bray (and Sable Basilik Pursuivant) so he was clearly another influence for the author.

Above is Fleming’s dedication to the Bond’s which he wrote on the fly page of his then latest book You Only Live Twice, what that must be worth one shudders to imagine! This after Fleming insisted Mary wrote in his guest book on a whole page just for themselves, “Write it BIG!” he exclaimed. It was interesting to read Mary’s account of Fleming’s home, now it is a luxury hideaway resort for those with the money to afford a 007 lifestyle: ‘

Goldeneye is a small property tucked away on an isolated promontory just outside the small town of Oracabessa. We found the white iron gates hospitably open between pink plaster posts mottled with lichen under the low branches of heavy shade trees. The gravel driveway dwindled to a grassy track and ended at the low rambling white house where, in true West Indian fashion, a long hibiscus hedge was strewn with towels and napkins spread out to dry. An elderly negro lady of ample proportions came through a doorway and Jim asked if Mr Fleming were at home’

It is not an easy book to find, it’s unremarkable to read but contains enough to satisfy Bond ephemera fans, it really is a book from another era, it is hard not to feel envious of her lifestyle and the places she visited in the name of her husband’s research. But he wrote an important book which set the standard for ornithology in the West Indies, Fleming loved it, as did Hillary Bray who was using it to identify a bird when the Bond’s met him!