English Seafood Cookery by Richard ‘Rick’ Stein is one of the greats of its genre. First published in 1988, it was one of the last of its kind to feature recipes and accompanying drawings very much in the style of his heroes who went before him such as Elizabeth David and Jane Grigson. It was Stein’s first book and would win the 1989 Glenfiddich Food Book of the Year Award, setting him up for an incredibly successful career in the media as well as the restaurant world.

Stein was yet to be a household name, ‘discovered’ by the late Keith Floyd and director David Pritchard he would go on to assume the mantle of premier BBC food and travel presenter and turn his home town of Padstow in Cornwall into a mecca for his many fans.

It really is a wonderful book, full of charming yet inspiring recipes, it makes those of us who can remember yearn for certain restaurants of the past. In an era of ‘grazing’ menus, eggs cooked at five degrees for thirty hours and soups made from ‘foraged’ common weeds and sticks we need a return to some of the dishes of our past and one could do worse than turn to a book such as this. 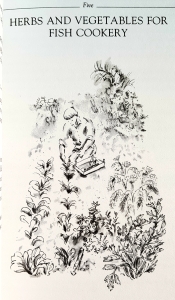 Stein is an intelligent man, well versed in classic literature and poetry he is clearly at home writing books, his style is endearing and similar to that of David and Grigson. Coming on the cusp of a new generation of chefs such as Marco Pierre White, Alastair Little, Rowley Leigh, John Burton-Race and Simon Hopkinson his is a fond farewell to the classics which would inspire the food revolution of the 1990s. This collection reminds me of the weekly recipes in papers such as The Times and Independent; comforting dishes interspersed with exotic sounding new foods from South East Asia and the Indian Subcontinent.

Of course we now take for granted buying lemongrass, fresh turmeric, varietal chillies and spice mixes from our local supermarket for granted but at the time of this book such ingredients were not widely available and this is why I love reading (and using) this book, it’s a pleasing reminder of the past, before the world shrunk and expectations rocketed.

Secondhand bookshops, if you can find one, often stock such gems as these, give me these illustrations over highly stylised photographs of an egg yolk in a bowl surrounded by hay anytime. I am particularly fond of those which incorporate travel within the accompanying text because those were my early inspirations for my first trips to places like Thailand and Singapore. Today, our heads are filled with a million doctored images on Instagram, we know what to expect before we set off but the likes of Stein made it all sound so appealing and exciting and the words encouraged the reader to use their imagination and I miss that sensation.

There is a wonderful honesty to his writing, in 1984 his restaurant won the Sunday Times/Taste of Britain award, he wrote: “This increased our turnover by fifty percent overnight. This was by no means all fun; we found ourselves quite unprepared for the extra business and upset quite a few people with slow service. It took us six months to sort the problems out” He goes on to say how a reader from Women’s Realm wrote to him after an article he wrote for the magazine to call him a pervert for saying a crab should be killed in boiling water for one of his recipes and suggested he enjoyed inflicting pain upon them!

So if you miss the days of when John Dory was fashionable, filo pastry starters, French terminology and cream sauces were all the rage then this is the book for you. Books such as these go beyond the genre of cookery, they remind us of what we have lost to technology as well as gained, and the same can be said for how we life our lives and the part food plays in that. We should aspire to a return to sharing meals around a table, of effort made to feed the ones we love with respect for the produce and the producers and most importantly of all, to time itself. Elizabeth David conjured up images of long lunches under shaded trees, a bottle of wine and good conversation. It was another era and, in her case, for the few and not the many, but the principle can and should be considered. Food, whatever the standard can and should bring people together and people should make time for food and one another and books such as this remind us of our part in that.

Sample Dishes: Fried Squid with an Ink Sauce, Montpelier Butter, Lemon Sole in Puff Pastry with Cider, Onions and Cream, Cockles and Mussels in a Horn of Plenty, Grilled Red Mullet with Mediterranean Flavours, Bream with Aubergines and a Retsina Sauce

Here is a clip of a youthful Rick Stein in his Padstow restaurant cooking on the late Keith Floyd’s BBC cookery series: