This month sees ‘Movember’ 2014, the month in which all males of facial hair growing age are asked to commit to growing a hairy abnormality for a good cause. In recent years we have seen some brave souls appear in front of the television cameras to show us their attempts, perhaps footballer Michael Owen’s infamous Mexican bandit style handlebars will never be beaten for sheer audacity. We shall see.

But what about facial hair and the attitudes towards it in previous decades? It would seem that little has changed. In 1958 when this photograph was taken it shows the artistic community, the intelligentsia, those with money to care less who were able to wear a beard with carefree abandon. This could not have been said for your car salesman for example who would be judged on his clean cut appearance and this attitude continues today. Because despite the ‘Movember’ craze growing in popularity and the public consciousness there still remains the overwhelming majority who refrain from taking part on account of their job.

But let us enjoy this piece of retro bearded glory for a moment. Taken in 1958 at Sardi’s on New York’s Broadway we can immediately spot a youthful Peter Ustinov in the centre. Also in the picture are cartoonist Al Hirschfield, conductor of West Side Story Max Goberman and author Gerald Kersch.

Sardi’s remains a Broadway institution ninety years on and those fabulous portraits on the wall behind remain to this day. 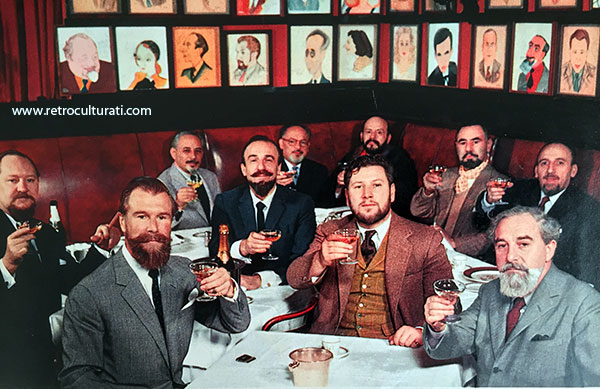