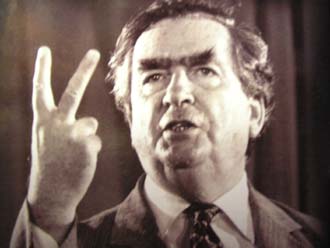 Denis Healey, who died today at the remarkable age of ninety eight was one of the biggest names in the British Labour Party’s history. During a career which spanned forty years as a Member of Parliament he was instantly recognisable, deliciously quotable and a man very much his own. He suffered no fools, spoke plainly and respected those who spoke in a similar fashion regardless of political persuasion. He held his own personal political beliefs and wasn’t afraid to speak them and one cannot help but wonder how battered and bruised today’s ‘special advisors’ would have been left had they been around in his prime.

So often in life we remember people for certain pivotal moments and either ignore or are ignorant of what preceded or followed such events. Healey will, quite rightly, be remembered in political history as the Chancellor who suffered the abject humiliation of asking the IMF for a loan whilst overseeing an economy which, in 1976 saw inflation reach almost 27%. Here was a Labour Chancellor introducing a budget which saw 2% added to the basic rate of income tax, VAT rise to 25% on the nation’s favourite items (TV’s, radio’s, jewellery, everyday electrical goods etc) and raised duty on the people’s fags, booze and motors. As today’s Corbynites hammer George Osbourne’s deficit reductions, Healey, in 1976 was cutting food and housing subsidies in a budget speech which signalled the death of his and his party’s fiscal policies. Britain’s position in the global financial market was a disaster and one which led Henry Kissinger to describe Britain to his President, Gerald Ford, as ‘a scrounger’.

Healey was most famously at odds with the far more Left Wing Tony Benn as well as his Prime Minister, Harold Wilson, who twice denied him his coveted role as Foreign Secretary, a role far better suited to him than that of Chancellor. His intellect was considerable, as was his courage. Having won a scholarship to Balliol at Oxford he took a double first before volunteering for service in World War Two. As a Major, he served in North Africa, Italy and Sicily and was awarded the military MBE for services as a beachmaster during the Anzio landings. Throughout his political career he clashed with Tony Benn and both men became darlings of the political press and cartoonists for their inimitable looks and fearless debating style. Healey was constantly ridiculed for his eyebrows and falsely known for calling people ‘silly billy’s’, a phrase he only began using after seeing the impressionist Mike Yarwood use it as part of his Denis Healey routine. He will long be remembered for likening debating with Geoffrey Howe as ‘being ravaged by a dead sheep’ and of Tony Benn; “Healey without Benn would be like Torvill without Dean. I can’t get the bugger off my back”

Years later, he and Benn made up their differences and would later be united in the same heartfelt grief following the deaths of their wives. Both men were long and happily married and in a radio interview with both, now elderly men, Healey admitted his struggle to come to terms with his wife’s passing.

And so, as with Benn, we say goodbye to another huge figure of British life in the mid twentieth century. Healey, like Benn and those on the opposite side of the Westminster benches were household names, instantly recognisable and totally unforgettable. You never forget Denis Healey, if you were of voting age you could not misunderstand his position and if you were younger, well, he was the man in the suit with the bushy eyebrows who appeared on kids TV and comedy shows.

We will not see his like again, imagine anyone now saying of their former opposite number (Healey on Lawson in 1997) “Yes I have been on a diet, but not the Nigel Lawson one. I don’t want to look like death warmed up”