President Kennedy and the German Spy 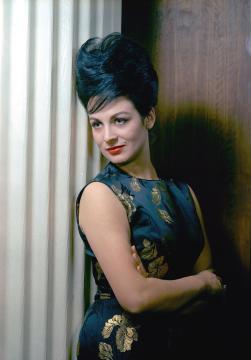 The late President John F. Kennedy has a divided legacy which could not be more stark and opposing. Adored by one half as the ‘President’s President’, a man who, had he not been assassinated, would have transformed America and the lives of the ordinary working man and woman, defeated communism and cemented America’s position as the beacon of democracy. Then there is the other half. The half who saw Kennedy as a mere mortal with an insatiable appetite for women and sex.

Kennedy’s extra-marital affairs are the stuff of legend, his relationship with Marilyn Monroe is well documented and as high risk as an affair with a Hollywood superstar was, it was nothing compared to his reckless use of paid prostitutes and one in particular, Ellen Rometsch.

In the early 1960s the favoured after-hours drinking hole for legislators on Capitol Hill was the Quorum Club above the Carroll Arms Hotel where the political elite and lobbyists could drink and mix with female escorts free from fear of journalists reporting on their errant ways. The ‘main attraction’ was undoubtedly a hostess whose looks, it was said, resembled that of Elizabeth Taylor along with a reputation for her skill in performing oral sex. But Ellen was no ordinary call-girl and as the wife of a West German army officer stationed at the German embassy in Washington her background rang alarm bells with the FBI.

Born in the town of Kleinitz (later part of East Germany) in 1936 she became a member of the local Communist Youth Party before joining a second Communist organisation until, in 1955, she and her family fled to West Germany where she married her first husband. By 1961 she moved to America with her second husband who had been posted on assignment to Washington and in turn her work as a hostess began.

As Rometsch’s reputation grew within the inner circle so she became known to President Kennedy who was introduced to her by Bobby Baker, a well known ‘fixer’ and one of a number of aides he used to bring girls to the White House for the sole purpose of sexual relations. Kennedy was taken aback by her stunning looks and sexual prowess, declaring her ‘the most exciting woman I have ever been with’. But Rometsch wasn’t interested in exclusivity, one of her favourite ‘companions’ was the then Senator, Gerald ‘Jerry’ Ford who used her services whilst his wife Betty was in the clutches of a serious drug problem. It would later emerge that J. Edgar Hoover blackmailed Ford with a tape recording of a sex session he had with Rometsch as a means of gaining information into the Warren Commission report on Kennedy’s assassination.

As her visits to pool parties and private sessions at the White House continued it was left to Hoover to approach Kennedy’s Brother, Bobby, the then Attorney General to inform him of his belief that Rometsch was an East German spy who had worked for Walter Ulbricht, the Communist leader of the GDR and was known to be having relations with ‘very high ranking officials’. Bobby Kennedy realised the implication and thanked Hoover for his discretion whilst the FBI continued their investigations. Time, it seemed, was not on the Attorney General’s hands and before the investigation was complete he had ordered the deportation of Ellen Rometsch back to West Germany by private plane in the company of one of Bobby Kennedy’s closest associates, LaVerne Duffy. Rometsch’s husband, Rolf soon followed and divorced her on the grounds of her adultery whilst Duffy, who had been engaged in a passionate affair with Ellen for some months before her deportation exchanged love letters and sent her considerable payments for her continued discretion.

Whilst her alleged role as a spy was never proven the fact that she engaged in such activities and her marriage was dissolved so promptly upon her return cast more than a shadow of a doubt. Interestingly, there are no public records to account for her departure and only after Duffy’s death did it emerge via his brother, a banker, that the Kennedy’s had continued to pay Rometsch thousands of dollars in Deutsche Marks for her silence. For her part she kept quiet, married again and never saw fit (or financial need?) to tell her story.

What is undeniable though is Kennedy’s legacy for pill-taking, partying and living on the edge during his term as the most powerful man on the planet during the very height of the Cold War. An abuse of power and trust which beggars belief.