What to read on vacation…… 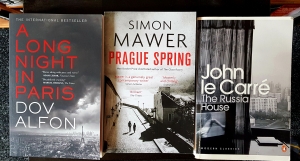 South East Asia beckons once again for this blogger and so, crucially, the choice of reading material for a long flight to Singapore and subsequent sleepless nights from jet lag! It is easily my favourite part of any holiday planning, finding new books to read or returning to a classic gives me a sense of what is to come and I love that.

So the number one question is always which genre to pick and I do tend to revert back to Cold War fiction. From a historical perspective I find it a fascinating time and a gold mine for quality authors so first up is John Le Carré and a book I have not read for a long while; The Russia House. Written in 1989 and set in Moscow in 1987 it was of course made into a film starring Sean Connery as Barley Blair, a jazz and whisky lover who unwittingly gets recruited as a go-between by the British Secret Service. I always find any Le Carré up to the late 80s, early 90s a safe bet and look forward to rereading this.

Simon Mawer is new to me, it comes as a recommendation from my brother who knows his stuff. Set in Prague in the momentous year of 1968, it should be a welcome account and reminder of what happened during the so-called Prague Spring which saw the eventual invasion of Soviet forces, the removal of the Czech leader Alexander Dubček and an end to any hopes of reform.

Dov Alfon is a former intelligence officer in United 8200, the most secretive arm of the Israeli Defence Forces which gives his book, A Long Night in Paris an important extra edge. Israeli kidnappings and Chinese commandoes are all in the mix and apparently fans of the espionage man of the moment, Mick Herron will enjoy it. So this is my ‘light holiday choice’, I am choosing Le Carré for the fourteen hour flight and subsequent sleepless nights or should it be Alfon? Oh, the agony of choice!