The Man Within My Head 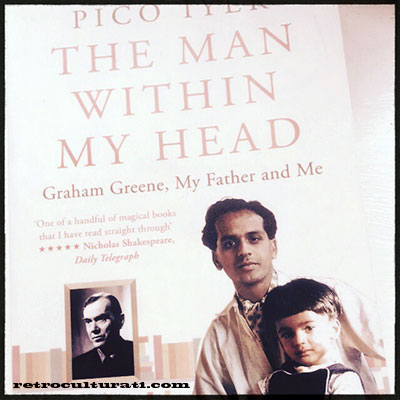 One of my more intriguing reads on my recent vacation was Pico Iyer’s book, ‘The Man Within My Head’, a retrospective of his life, his relationship with his father and how his long admiration for Graham Greene’s novels have woven a thought-provoking path throughout his adulthood.

The concept in itself is interesting enough and cleverly done. For the Graham Green fan there is plenty in here to keep them interested, remove the main thrust of the book and you have a condensed, ‘Norman Sherry for beginners’ if you will. If that sounds condescending (I suppose it does) then it isn’t meant, he refers to Sherry’s three-volume epic on Greene’s life several times but it captures the interest in Greene and, one would hope, encourage the reader to take on Sherry at a later date. What is clear however, is that despite Iyer’s admiration for  ‘Gram Grin’ (as Kingsley Amis called him) he falls short of the obsession which blighted Sherry. What Iyer sets out, and achieves with this book is to relate the importance of Greene, and the literary word in general to our own lives and that of our loved ones which, in Iyer’s case, is his own father. Iyer argues the point that a writer can affect us in ways which our closest family, friends and lovers cannot. For Iyer, Greene understands him in ways his father never did or could and he is at pains to point this out to his Japanese partner, Hiroko with whom he lives with in Japan.

The basic premise is nothing new of course, how many of us would own up to describing a certain song lyric as ‘could have been written about me’, it isn’t difficult to associate oneself with an emotive text if the initial desire is already there and, like any ‘fan’, Iyer, it would seem to me, wants to be both Greene the writer, and the main character in his novels.

The standout work of Greene’s in Iyer’s eyes is clearly ‘The Quiet American’, it is the most referenced and deeply analysed, and in the central character, Thomas Fowler, the easiest to see one’s own reflection. Fowler is a middle-aged man; wracked with feelings of guilt, loneliness and failure and seeks solace in the arms of a beautiful young Asian girl whom asks for little yet offers much more. For many of us, Fowler’s mid-life misery is easy to understand, as is the bittersweet and ultimately tragic allure of Phuong and her like but Iyer doesn’t stop there. ‘The Quiet American’ is as much about friendship between two men (Fowler and Pyle) as it is between mis-placed lovers and American foreign policy. He fails to remind us of a similar relationship between two rivals in ‘The End of the Affair’ choosing to concentrate on Greene’s very real bond with Kim Philby and his refusal to condemn his subsequent actions, a misguided loyalty which is a familiar theme in his novels. Iyer again, uses Greene’s characters to relate to his own friendships but it is the sense of Greene as a father figure which leads to the book’s saddest entry. In a rare moment of shared common interest and bonding, Iyer describes the moment his father leaves an answer phone message praising his son for an article he has written on Greene and his father’s tears as Iyer jnr contemplates Greene’s ability to recognise our inner demons, a piece which clearly struck a nerve in his dying father.

Iyer visits Greene’s old haunts, from Brighton to Saigon as well as the brothels, hotels and drinking holes so favoured by the writer. He shares Greene’s passion for travel and explores the solitude Greene both sought and experienced from it as well as his own travel experiences on the Greene trail. It is near impossible to read Greene and not become even slightly absorbed by his travel accounts and the the possibilities it can bring, and there is enough within Iyer’s own adventures to engage the reader.

As a book it is cleverly conceived and executed, Greene fans will enjoy it and romantics, such as Iyer himself, will find comfort in the book’s confirmation that great artists do indeed, write especially for and about us. But then we knew that already, didn’t we?