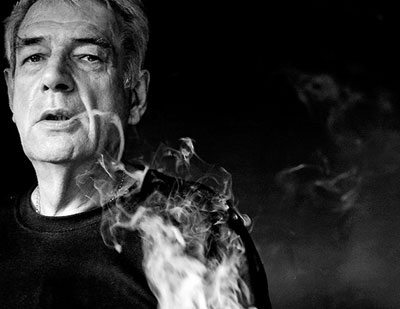 Was there ever, will there ever be a more extrovert photojournalist than Tim Page? A man who epitomised not only the ravages of the Vietnam War but the culture and inevitable casualties of the sixties generation, those who lived life to the full and beyond.

Page, by his own admission, ‘fell’ into photography. “It chose me” he said, and he was right. Page took risks like few others, fuelled by drugs, alcohol and the ‘fog of war’, he went into combat zones and left with injuries most others would have called quits at. His rock n roll attitude would lead to Michael Herr writing in ‘Dispatches’, his seminal book on Vietnam, that Page was the ‘most extravagant of the wigged-out crazies running around Vietnam’. We can imagine why he did it, like the infantry men whom he followed, he saw sights, smelt smells and lived our worst nightmares. Little wonder he worked so hard to block it out.

The stage was set for Page to enter the theatre of war. An orphan, born and raised in London, he was married and divorced by the age of eighteen. Once single, he set off to Europe, working as a hotel cook, gradually heading East, through India and into Laos and finally Vietnam by the age of twenty. His first of many wounds came in ’65 in Chu Lai where he was hit by shrapnel in the legs and stomach and then a year later during the Buddhist riots in Danang where he was hit in the head, legs and back by more shrapnel. Later, whilst sailing on a boat in the South China Sea, American planes attacked the vessel, believing it to be Viet Cong. Only Page and two others survived but he sustained over two hundred separate injuries.

The boat strike, along with advice from friends and colleagues persuaded Page to leave Vietnam and head for America via Paris where he met up with fellow photojournalist, Sean (son of Errol) Flynn. He travelled across the States, continuing his photography but the lure of Vietnam proved too strong a calling and he returned, aged twenty-two into the thick of the action. Page became legendary for his antics, everyone knew who he was and his photographs were earning him a reputation many others could only dream of. Back in Cu Chi, Page was aboard a helicopter which received orders to land and pick up wounded soldiers. Page jumped out and followed a sergeant to help collect the men. The sergeant stood on a mine which blew both of his legs off and floored Page with a two-inch piece of shrapnel which went through his forehead, stopping at the base of his brain.

He returned to the States for a year of neuro-surgery, paralysed down his left side he recovered enough to give up his wheelchair and continue his exploits. In 1967 he was arrested with two other journalists at that Doors concert featuring that Jim Morrison moment. But despite the wild times there can be no doubting Page’s sense of camaraderie, his unique book called Requiem features all of the photographers, regardless of origin who were killed in Vietnam. When his close friend, Sean Flynn went missing in Cambodia he set out to discover his fate and was back there again in 2009 to search for his remains. Page’s exploits in Vietnam would prove the inspiration for Dennis Hopper’s character in Apocalypse Now, and for those of you familiar with the film it should help to complete Page’s profile. He wasn’t a top level photographer but he saw what he saw and recorded it to the best of his untrained ability and created not only his own personal legacy but helped a misled generation back in the West understand the horrors of the war.

I shall finish with this short interview, he is a man who deserves an audience, age and experience afford him some of the lines he says, his face shows the life lived and the credibility for his words…