Travels in the Footsteps of D.H. Lawrence

Escape to the Sun by Paul Hogarth…. 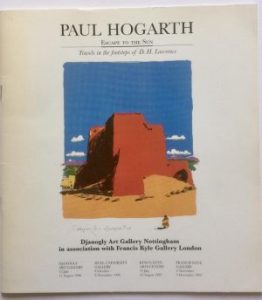 In 1996 the Djanogly Art Gallery in Nottingham, England played host to the stunning exhibition of paintings by Paul Hogarth which traced the travels of D.H. Lawrence (1885-1930) in Hogarth’s inimitable style. In this short but wonderful pamphlet we are given a remarkable insight into Lawrence’s travels and the places he stayed in England, Mexico, the Mediterranean, America and Australia.

Hogarth’s love of travel and literature saw him collaborate with Graham Greene, Robert Graves and Peter Mayle in travelogues which gave us a unique understanding of both the writer and the artist’s work. And travel Hogarth did, starting from Lawrence’s earliest base in Nottinghamshire he traced his path across continents capturing the essence of the Lawrence world and what was left of it for Hogarth to capture decades later. 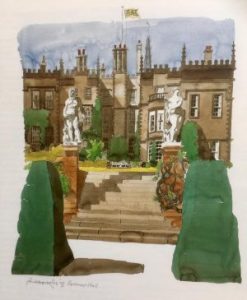 Renishaw Hall (left) in Derbyshire was visited by Lawrence and his wife, Frieda in 1926 as part of an extended stay in England during the summer which included a trip to Mablethorpe on Lincolnshire’s east  coast, it was as a young boy Lawrence would holiday in Lincolnshire and the surrounding counties. The Hall and local village is said to have been an influence on his great novel, Lady Chatterley’s Lover (1928)

Mexico would prove an important destination on the Lawrence map, reaching there via a stay in San Francisco having crossed the Pacific from Tahiti. It was in Taos, New Mexico where he stayed with Mabel Dodge Luham in the heart of the artists quarter.

Hogarth’s watercolour of the Palace Hotel in San Francisco (opposite) offers another historical gem, at the time of its opening in 1885 it was the largest hotel in the world until fires brought on by an earthquake in 1906 destroyed the building and gave way to the new Palace hotel which opened in 1909 and would have welcomed Lawrence in 1922.

It is difficult not to feel a sharp pang of envy reading both Lawrence’s and Hogarth’s travel exploits, oh for the opportunity to undertake a paid recognisance of one’s favourite author’s hang outs! Hogarth sketched on location, he took the occasional  photograph but most of his work was captured in situ in corners of Irish or New York bars, dusty streets in Majorca, Cuba or Africa. He gave an added element of life to his paintings by the inclusion of everyday people going about their daily lives. Some argued that this placed him under the banner of illustrator only, I disagree. His paintings captured that period in time in the most vivid way, how these characters are drawn captures the normality of life, there are few who can match him in this regard.

My final choice is this beautiful piece painted in 1991 of 133 Macquarie Street in Sydney, Australia. Lawrence visited and stayed here in 1922 with Frieda where they spent the next three months.

This is not a book but it does include a number of Hogarth’s best loved paintings, it gives newcomers to D.H. Lawrence an excellent timetable of events in the writers life as well as a charming reminder of the days before high-def images plucked from an electronic cloud.