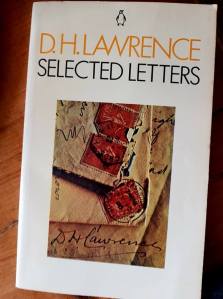 I have recently read D.H. Lawrence: Selected Letters (Penguin) and was struck by not only his correspondence with the writer and socialite Lady Cynthia Asquith (1887-1960) but by the depth of his anti-war sentiments during World War One. One letter to her in particular stood out following the death of her brother in 1915:

‘What can one say about your brother’s death except that it should not be. How long will the nations continue to empty the future…I am not angry any more, only unfathomably miserable about it all’

As the letter continues, the seeds of escape are beginning to come through. His work was constantly censored through the war years and he looked to emigrate to America: ‘I think I shall go away to America if they will let me. In this war, in the whole spirit which we now maintain, I do not believe, I believe it is wrong, so awfully wrong, that it is like a great consuming fire that draws up all our souls in its draught. So if they will let me I shall go away soon, to America. Perhaps you will say it is cowardice; but how shall one submit to such ultimate wrong as this which we commit, now-England’

Given that Lawrence knew Asquith to be a pacifist it makes it difficult to believe she would think him a coward. Her brother’s death would have cemented her hatred for war and by the end of the letter Lawrence leaves no doubt about his own position and plays to a willing audience in her: ‘Do not think I am not sorry about your brother-it makes me tremble. Don’t think I want to hurt you-or anybody-I would do anything rather. But now I feel like a blind man who would put his eyes out rather than stand witness to a colossal and deliberate horror’

This collection offers an autobiographical view of Lawrence’s life, his travels and torments. He lived in voluntary exile, what he described as his ‘savage pilgrimage’ following his departure from England in 1919 and these letters which were never intended for publication, offer a remarkable insight into Lawrence and his closest confidants. Lawrence was never conscripted on health grounds, his hatred of the war was palpable and drove him to explore France, Italy, Australia, Mexico, America and Ceylon. We hear much of the sense of patriotism in the two Great Wars but how the mettle must have been tested when so many suffered and Lawrence makes reference to the role of women in changing public opinion: ‘I am so sorry for your mother. I can’t bear it. If only the women would get up and speak with authority’

One of the great shames about the demise of the written letter is the end to correspondence such as this. One of the reasons I draw so much pleasure from reading letters by noteworthy figures is the insight one can glean from them. Whilst we knew much about Lawrence for better and worse we can see the writer, soul-bared in a way only a handful ever once did.