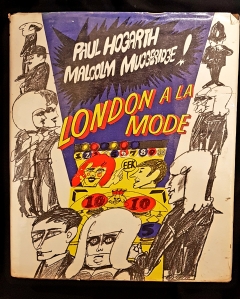 London a la Mode is a remarkable collection of sketches and observations of 1960s London by the artist Paul Hogarth and writer Malcolm Muggeridge.

Malcolm Muggeridge (1903-1990) was a journalist, former spy during the Second World War, a staunch follower of the Roman Catholic Church and a well-known broadcaster. There was a less than saintly side to him when it came to women and his behaviour towards them which was in stark contrast to his public persona as a self-confessed ‘Jesus Freak’ and he courted controversy whenever he could. Once a vocal supporter of the Soviet Union before the war he went on to have a total change of heart and become consistently critical of the regime until his death. 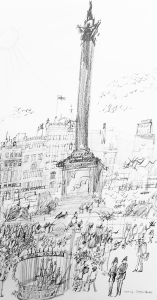 Paul Hogarth (1917-2001) and his work has been covered extensively on this website including an in-depth look at his career and his full bibliography which contains many reviews of his books. An artist of great renown he was perhaps best known for his front cover illustrations for Penguin paperbacks in the 1960s onwards and more especially for those by Graham Greene.

This was Hogarth’s ninth book, first published in 1966 by Studio Vista it followed a familiar and by then, well established theme of travel sketches and observations. Previous travelogues included Greece, Ireland, New York, Majorca, South Africa, Eastern Europe and a remarkable journey across Cold War China.

Hogarth divided his sketches into morning, noon, evening and night. It was an inspired idea and captures the life of the city from the early morning commute through to the late night casinos and strip clubs in Soho. The artist, in his own typically reportage style of drawing did not hold back at seeking out that and those which make London one of the world’s most fascinating cities regardless of the era.

Every city has more than its share of great characters and Hogarth was a genius at picking them out, take the lady opposite: ‘84 year old Jeanne de Gebsattel, a Luxembourg baroness, once had a big place herself. A Londoner by adoption, she know lives in a tiny flat in Hampstead. “In my day, rich people did not take jobs. Now they take what they can get” The baroness has been a char, busker, cook and night nurse. Now a model, she sits for art students at the Slade, the Royal College of Art and St. Martin’s’. Everyone has a story.

Pubs have featured heavily in Hogarth’s work, none more so than in his books with the writer Brendan Behan in Ireland and New York. This ability to sit himself in the corner of the bar, observe and then draw the characters made him unique in his field and undoubtedly influenced his work for Penguin from the mid sixties onwards. 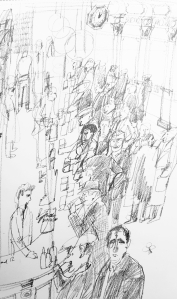 Mugggeridge’s accompanying text for Hogarth’s pub sketches fits the bill; ‘The bar is still almost empty. I sit in a corner by myself watching it fill. The same rubicund faces and loud, assertive voices of old; the same disguised sycophancy-laughing at a joke a shade too loudly and long, attention a shade too ostentatious. So may happenings that I associate with this place-the Abdication, Munich, Suez. Voices vociferously raised, growing thicker as the glasses empty, tables banged’

Opposite is the old Mooney’s Pub in the Strand, the white jacketed barmen serving punters from all backgrounds, the flat caps and bulbous noses of the hardened drinkers, the ornate décor, the clock marking the lunchtime beer. It’s all there in a single sketch, Hogarth plants us right there, in London in ’66.

No observation of London’s characters would be complete without a tip of the tricorne hat to the Chelsea Pensioner. Hogarth draws one in full parade dress and Muggeridge writes; ‘Chelsea pensioners are long-lived. Yorkie, on the left, is eighty. Said he: “We don’t lose many before ninety!” He joined Kitchener’s New Army in 1915 “I need yer, the poster sed, so I went” Muggeridge describes how ‘they plod around the streets, sample the odd pint of ale, pose for art students and chat up the last of the nannies’

Hogarth sketched two other pensioners, simple pencil drawings but he conveys the years lived in their faces and it must have been humbling to see and draw World War One veterans with their hard-fought medals and deep pride.

Cities come alive at night and Muggeridge tells us how the gambling clubs alone have a turnover of ten million pounds (remember it is 1965/66) Hogarth draws scenes from the capital’s famous spots such as Annabel’s which opened in 1963. ‘Midnight approaches. What happens after the theatres and pub close? Plenty. This isn’t 1956! A medley of crowded cafes, gaming clubs, drinking dens, swinging discotheques and costly cabarets are able to keep up an army of rakes on the go-go till dawn’s early light’ In the sketch opposite Muggeridge accompanies it with a mention of William Hogarth, Paul’s forebear and how London’s fame as a gambling centre in Hogarth’s day has now been restored.

Landscapes and street scenes combined effortlessly in Hogarth’s work, it is clear that he found the addition of people to be beneficial to a landscape and whilst any London landscape is bound to be littered with sightseers and locals Hogarth applied this to more remote settings too.

Opposite: ‘Trafalgar Square, heart of the Commonwealth, and one of the finest sites in Europe for pigeons, pick-ups and street photographers’

London’s best known areas are covered, there is a lovely sketch of Regent’s Canal, the hustle and bustle of Piccadilly, the great parks and Hamstead Heath with the speakers appealing to passers-by to repent and ‘seek the Lord’. This really is London at a peak moment in its twentieth century history, there was a cultural sea change happening and the young had found their voice and their style. Muggeridge was as far removed from the new beat generation as it was possible to get and his prose reeks of it but Hogarth embraced it in his work and the contrast between the young and the city workers is gloriously evident. 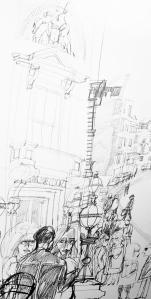 London a la Mode reminds us of the make-up of a city, it is easy to think of 1960s London in terms of Carnaby Street but it was, in reality a small part of a much bigger scene. Hippies and Mods were viewed with suspicion and contempt by those trapped on the city treadmill, there was a post-war hangover with the lower middle class working hard for little reward seeing a generation below them shrug off the shackles and make life fun and carefree. The characters Hogarth draws in the pubs offer reflection of city life and that perhaps, in the end, the basics of life seldom change.