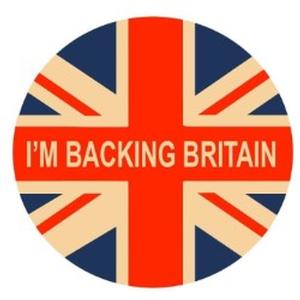 With the advent of Brexit looming (or not) I thought I would take a look at an event in 1968 which might raise an eyebrow in today’s climate. The I’m Backing Britain Campaign was designed to boost productivity in the British workplace by staff working an extra half an hour for no pay.

Initiated by a group of secretaries from Surbiton in South-West London, the campaign soon took off with thousands joining in across the country winning the endorsement of the Labour Prime Minister Harold Wilson despite heavy opposition from the trade unions.

A single sung by Bruce Forsyth was released and soon the Union Jack, the group’s inherited symbol could be seen on bags and t-shirts everywhere. Ironically, the t-shirts were found to be made in Portugal because the businessman who came up with the idea said he could not find a t-shirt of quality at the right price by a British manufacturer. One in the eye for the late businessman Robert Maxwell who tried to instill himself as the leader and use it to ‘Buy British’. His own campaign was a flop and by March 1968 he had given them both up.

The movement came on the back of a financially difficult 1967, the government’s budget had set the largest deficit since World War Two and following the devaluation of the pound, Conservative MP John Boyd-Carpenter wrote to the London Times calling for those higher up the income scale to work an extra half day unpaid as incentive to the British workforce at large to increase their own productivity. By the end of 1967 Fred Price of Colt Ventilation and Heating Ltd issued a memo to the workforce stating that the deficit would easily be cleared if every worker in the country worked an extra half day for no extra pay. As the memo circulated, five of the company’s secretaries decided to act on his words and declared themselves available and a plan was set in place to be the first company to volunteer. But word spread quickly and more companies acted and by early January 1968 thousands had joined the campaign.

But all good things come to an end and this was clearly no exception, it is hard to imagine this happening in today’s climate, employees often go over and above the call of duty (and pay) for the greater good but on such a wide scale for the apparent good of the country is another matter. Confidence in our politicians and the future of the UK post Brexit is very low and it is going to take more than five secretaries and a song to fix it. I wonder, fifty years from now, what future bloggers of history will make of it all? Thankfully I won’t be around to find out.