Review of ‘Cosmopolitan’ by Akhil Sharma… 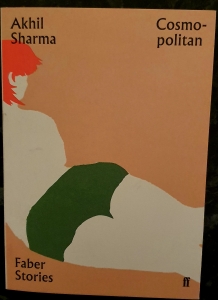 In Cosmopolitan by Akhil Sharma we find a new and exciting voice in the short story format. I bought this to wile away a couple of hours one particularly wet and miserable morning and found myself immersed in both of the central characters whilst trying to determine the period it was set in.

The book is too short to warrant a deep synopsis, for the price it is worth taking a chance but it will not leave you disappointed. This is a story which covers many human emotions; love, loss, loneliness, community, race, age and jealousy. Sharma offers up each one to the reader as a trigger for their own specific memories and that quiet nod of understanding and remembrance as one reads underlines the writer’s talent.

It is a story which bests resonates with those of middle age and above, Sharma gives us a man and a women both struggling to make sense of where in life they have ended up. The man, an Indian trying to find his way in an alien world that is New Jersey is estranged from his wife of many years and struggles with the concept of dating. His wife and daughter’s departure lead to closed curtains and dusty furniture, his neighbour, also middle aged and single, is sexually active but no less lonely and the two form a bond of sorts. The man becomes infatuated, less so with her but more with the thought of losing her. Juvenile jealousy grips him and turns her off and this sense of irrationality caused by an inherent loneliness is well written.

The book moves along at a gentle pace, Sharma uncovers layer after layer of human emotion yet ends on a promising note. A pleasant read.