The Power and the Glory

Graham Greene’s ‘The Power and the Glory’….

Graham Greene’s 1940 novel, The Power and the Glory is a wonderful, typically Greene take on Catholicism amidst the turbulence of the persecution of the Catholic Church by the Mexican authorities in the late 1930s. Greene’s first-hand account of this was recorded in his 1939 book, The Lawless Roads which became the inspiration for this novel and his subsequent hatred for the Mexican authorities. The main character is an unnamed priest, an alcoholic on the run from the authorities who had previously fathered a child and now, in his state of exile, is haunted by his mistakes yet continues to seek out drink. Drowning in his own gluttony and self-loathing, this ‘whiskey priest’ travels in secret, hearing peasant’s confessions in the dead of night often with reluctant annoyance when drink or food is not available. 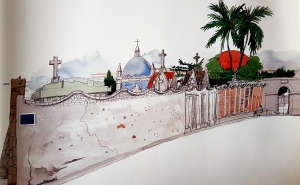 Part of the inspiration for this underground priest came from the story of Miguel Pro, a Jesuit priest based in Tabasco, Mexico, who was executed in 1927 on false charges. Pro was forced to follow his faith and perform his duties in secret which Greene documents in The Lawless Road. Paul Hogarth’s painting of the bullet-ridden wall at the Central Cemetary comes from his collaboration with Graham Greene and the painter’s view of the novel years later. Comparisons between Pro and Greene’s character end there but remind us of the bitter reality of state persecution and how so many suffered for their faith.

The Priest is pursued with vigour by The Lieutenant, an idealist whose hatred for the Church knows no bounds. He believes in social reforms to end poverty yet abuses his power through hostage taking and murder in his ambition to nullify the influence of religion. From the opening chapters we see Greene’s take on Mexico, we are introduced to Mr Tench, an English dentist desperate to return to his native England who shares brandy with the priest and ogles a young girl to the disturbance of the priest who is reminded of his own failings with Maria, the mother of his illegitimate child. It is this strain on faith which makes the book so enthralling, the priest is a dark, deeply flawed character and Greene demonstrates the art of self-reflection and that questioning of one’s own faith through his chief protagonist like no other. 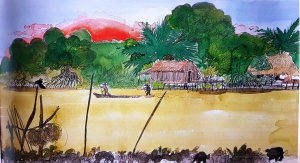 The priest encounters numerous moments for self-reflection, not least in the time he spends in jail for possession of outlawed alcohol. Holed up with a ‘pious woman’ who witnesses a couple having sex in the corner much to her disgust, he attempts to change her view of their actions. He suggests that whilst the Church and its Saints talk of the ‘beauty of suffering’ in reality, mere mortals such as themselves find beauty in sin, and suffering as something which is simply painful. But his considerations fall on deaf ears as she condemns him a drunk and a sinner without repent, when the priest asks her to pray for him she replies; “The sooner you are dead, the better”

So Greene’s choice of character to reflect his own wrestles with faith, the Church and indeed its future is an interesting one and one which, unsurprisingly, caught the attention of the Vatican who were concerned how, given Greene’s celebrity, his view of Catholicism in the book could impact upon them. Describing his book as ‘paradoxical’ and ‘dealt with extraordinary circumstances’, their view was communicated to him in letter via the Archbishop of Westminster. Greene, however refused to alter the book and with its lack of public condemnation, the Church let the matter go. 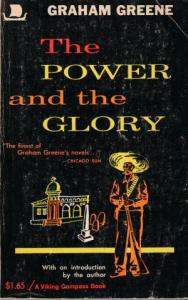 Without a bishop for guidance, the priest is desperate for the pursuit of him to come to an end, yet he refuses to surrender himself to the authorities. But in the end he is betrayed by the half-caste Indian peasant, The Mestizo who the priest knows will become his ‘Judas’ yet his sense of duty to hear a false confession pushes him on to his inevitable capture and death. The priest faces his maker with no one to offer him absolution, going to God ‘empty handed‘ in the knowledge that he could, in his view, have become a saint needing only ‘a little self-restraint and a little courage’. Greene finishes with ‘He felt like someone who has missed happiness by seconds at an appointed place….’

It is a wonderful book, read in an historical context it offers a valuable reminder of the cruelty of the Mexican authorities towards the Catholic Church and its practitioners, Greene combines his study of society from bottom to top with his own grapples with religion in the style which made him such a unique and gifted author.

A Burnt Out Case

The Heart of the Matter