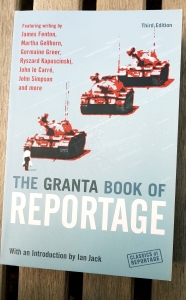 say for Granta Magazine about the Swiss Spy, Jean-Louis Jeanmaire which was reprinted in this wonderful collection of essays; The Granta Book of Reportage (2006) It is an intriguing essay and indeed real-life story, told in Le Carré’s inimitable style.

Le Carré begins by setting the scene of his interview with Jeanmaire; ‘It is evening. We are alone in his tiny flat on the eastern outskirts of Bern. He is cooking cheese fondue for the two of us. On a shelf in the kitchen stand the steel eating bowls he used in prison. Why does he keep them?….”For the memory”

Le Carré has brought a bottle of whisky, they raise their glasses, ‘drink eye to eye, raise them again, then perch ourselves awkwardly at the table while he rolls the whisky around his mouth and declares it drinkable’ Jeanmaire was a Brigadier of longstanding in the Swiss Army, married to a Swiss woman of Russian parentage, he was found guilty of passing military secrets to the Soviets and imprisoned for eighteen years, a sentence Le Carré found difficult to agree with. The author felt sympathy for this eighty-year old widower and his interview is transcribed into a compelling narrative on par with the fiction he was writing at that time.

It is an intriguing tale, quite why Jeanmaire did what he did remains a question, it certainly wasn’t for monetary gain but Le Carré brilliantly describes the relationship between Jeanmaire, his wife and his Soviet ‘handler’, Vassily Denissenko and the long game the Soviets played to snare a man who could give them very little. Le Carré, as only he can, describes the transition from loyal servant to spy: ‘In every tale to one man’s path to spying, or to crime, or merely to adultery, there is traditionally one moment that stands out above the rest as the moment of decision from which there is no return’ In Jeanmaire’s case, it was the moment he handed over two pages of a confidential document to the Resident of the GRU in Bern. Jeanmaire was, however, no super spy, he was taken in by his handler despite him sleeping with his wife, who gave her a bracelet which she showed off to her husband. Jeanmarie squared this with Le Carré by saying how attractive Denissenko was in every way; “If I’d have been a woman, I’d have slept with him myself!”

I found it an interesting essay, one gets the sense of how the author builds his stories through meeting real life characters such as Jeanmaire. The world of espionage is dominated by the nondescript idealists whose naivety was plundered by talent spotters before leaving them at the mercy of those they betrayed. The Swiss government made an example of Jeanmaire, like Denissenko and the handlers who succeeded him, they saw Jeanmaire’s weakness and exploited it. Pushed to exaggerate his crimes with the promise of freedom, he was punished far harder than his spying had warranted, his wife was made homeless before all charges against her were dropped in a courtroom sworn to secrecy. No files were made available for public view, Le Carré had to rely on Jeanmaire’s account of the proceedings but what was beyond doubt, was the Swiss authorities determination to show the Americans, British and Russians that their house was in order and if that meant using a hopeless braggart as an example then so be it. Jeanmaire joined countless other such men and women across the globe in public exile.

So here then, is a real-life lesson in how to procure and play an agent in the field, Le Carré reveals how, in truth, the spy needed the handler more than the handler needed him. What Le Carré finds in 1991 is an eighty year old lighting a candle every day in memory of his late wife, still loyal to her as well as the country he betrayed in his own small way. The author tells him that he has managed to track down his former handler in Moscow who was in hospital with liver problems. When Le Carré tells Jeanmaire that he will pay Denissenko a visit, the old soldier smiles radiantly and tells him, “Oh, you are lucky!”